We share a wing in author James Boyd’s house, part of the Weymouth Center for the Arts and Humanities.

Four or five writers are here now. I’m not sure of the numbers because few of us leave our rooms, except for occasional necessities. Every once in a while, two or more folks end up in the kitchen at the same time. They chat for a few minutes, then ghostly, they disappear into their rooms. 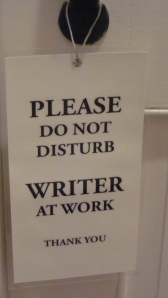 I’ve seen Carolyn most often. We seem to keep the same coffee hours, the same late evening walking hours. We’ve agreed to do a reading of our work Thursday night. We’ll see if anyone else wants to join, but so far, I haven’t seen anyone else since my arrival. And you know what? It’s okay. I love not feeling like I have to be social. I say hello when I fill my coffee cup and then leave. Others (well, Carolyn)  do the same, usually with the preface, “I have to get back to work.” No rest for the writing weary.

I’m staying in the Paul Green room, a North Carolina writer and playwright. He might be most famous for The Lost Colony play, at least that’s how I know of him. Across the hall from me is the Thomas Wolfe room and the Max Perkins room. I was hoping for the F. Scott Fitzgerald room. Or even Sherwood Anderson, whose linked short stories were the cornerstone of my MFA craft thesis, but that’s okay, I’ll take Paul Green. I love The Lost Colony play and recommend to anyone who spends time in the Outer Banks.

Behind the Weymouth house is a state park with a few loop trails. The trails are sand. Lots of pines. It’s a nice walk in the evening, because during the day, it’s hot. Central Carolina hot. The grounds are filled with beautiful gardens and several lily ponds and fountains. It’s tempting to swim in one of them. But I won’t. I’d like to come back again.

← “Litany” in Behind the Yellow Wallpaper
Greetings from the Bird Room →