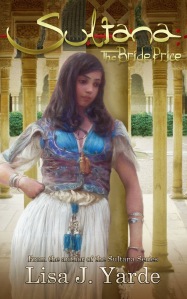 My heroine Jazirah is based on a historical figure, the cousin and eventual wife of the Moorish Sultan of Granada Muhammad V, born in Spain when a fourth of the Iberian peninsula remained under Muslim rule. The character of Jazirah is strongminded, but loving and dutiful to those within her inner circle. Her father’s experiences with his elder brother, Muhammad’s father, who jailed him for treason in Jazirah’s childhood, have negatively skewed her opinion of her family. At the beginning of the novel, she isn’t keen on marrying Muhammad as a means to seal the breach within their dynasty. While eventual necessity forces her to become his spouse, the union doesn’t bring about the peace Muhammad wanted. In fact, all hell breaks loose as his hold on his kingdom and his wife starts to unravel.

This is the fourth book in the Sultana series, which began with the great-grandparents of Muhammad V and his wife. This union particularly intrigued me for several reasons. One, Muhammad’s wife’s name was deliberately left out of history, while so many of the names of her female ancestors and descendants were never hidden. I named her Jazirah, which means “the island” in Arabic – it seemed appropriate for a woman who spends so much finding her own direction in life alone. Yet, I’ve always wondered about the lack of her name. Was there something about this woman’s behavior that made historians of the period deliberately hide her identity? Also, the possibilities for the marriage intrigued me as it could have gone several ways; the couple had no reason to trust each other, but they came together and had at least one son. Was there just a sense of duty in that relationship or did they come to love each other? Lastly, what was the role of Muhammad’s wife as his attempt at peace fell apart? Did she align herself with her husband’s enemies or was she loyal to Muhammad? These questions begged for answers; Sultana: The Bride Price provides plausible explanations for the twists of turns in Moorish Spain’s history.

I’ve loved history since I grew up in Barbados surrounded by the relics of its colonial past. Sometimes I’m ashamed to say, but 19 years of research has gone into this novel and the series. While it may seem obsessive (it is – I’ll own my truth and say I’m obsessed), I don’t think I could have done this period of history justice without tons of research and trips to the Alhambra in Granada, where Muhammad and his family once governed the last Moorish kingdom in the country.

I write historical fiction and I have dabbled in a contemporary novella, but my heart and passion remain wrapped up in the medieval period. It’s very important in writing this series that I remain grounded in the traditions and customs of my characters. They don’t question marriage between close cousins or the burdens of their slaves. They hold Moorish ideals.

I close my door and turn on Middle Eastern music when I want to write the books in the series. I can’t have anyone else present in the room, even if there’s absolute quiet. I write when I can, day and evening. Some days I slack off or other needs take precedence, but my writing is important.

Balance? What’s that? Ha-ha. I’m aiming for it, not quite there.

I’m wrapping up the last two books in the series, Sultana: The Pomegranate Tree and Sultana: The White Mountains. The fifth book covers the period of Muhammad V’s great-grandchildren with a focus on Aisha, mother of the last Sultan of Granada. The pawn of her father, she endures a sham marriage to a cruel tyrant, forever divided from the man who has claimed her heart. Years later, when a harem rival threatens to undo all that Aisha has achieved, she must preserve her children’s future or see her family fall forever. In the sixth and final book, Aisha’s son Muhammad and his wife Moraima face the culmination of their desperate efforts to hold their portion of Muslim Spain. Her husband’s city, caught in the death throes of a tumultuous ending, faces dangerous foes. The united Catholic monarchs gain ground steadily, encroaching upon Granada, while rivalries fracture the kingdom from within. Moraima must ensure the survival of her family, shattered by warfare and betrayal.

Don’t stop persevering. It’s easy to lose your focus and to be discouraged, but keep working at your writing. Having difficulties? Join a critique group and seek honest feedback. Writing can be a lonely experience. Make connections with other authors and learns what you can from them. Make sure to give back to the writing community and pay it forward.

10. Book links: Tell us where to find your books!

My books can be found in ebook and paperback format at Amazon, Apple, Barnes & Noble, Kobo, and Scribd, and in audio format at Audible. Check my website at http://www.lisajyarde.com/p/buy-books.html.

Thanks so much for allowing me to connect with your readers, Sheila.

← Patrick Ross, Author of Committed: A Memoir of the Artist’s Road
Thank You for a Great Book Signing! →