Congratulations to the winners of the Goddess Giveaway! Books will be going out next week – watch for your copy of Once a Goddess, Fiery Arrow, or Church of the Oak!

About Fiery Arrow: Brigid, a gifted druid priestess, seeks to preserve Ireland’s ancient religion when Christianity broaches its shores. When she confronts Patrick, the charismatic leader of the newly-arrived Christians, she realizes they have a shared history, tied together by a bond formed lifetimes before. As Brigid persists in reminding him of their past and of his promise to help her revive the Ancient Ones, Patrick denies the deal he made as a 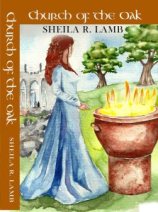 lonely slave boy to a goddess he believed to be only in his imagination.

AboutChurch of the Oak: When Brigid starts a rigorous druid training school called Cill Dara, she’s threatened with a lifetime of slavery. In order to survive, she must span two cultures and two faiths when the Christians and druids decide to teach their students together, an undertaking that places her… 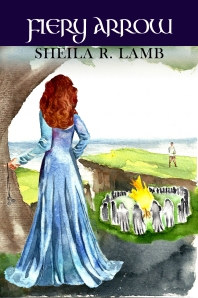 For two days in a row, Brawen’s Journey: Fire and Ash, a companion short story to the novel, Fiery Arrow, has been in the Amazon Kindle top 100!

With Patrick’s help, Brawen escapes a life of slavery at the hands of Irish raiders. But her journey home becomes her most difficult challenge yet. Her village is in ruins. Her family has gone missing. As she searches for pieces of her past, Brawen must evade the ever-watchful eyes of the Roman legions and find her way back her Celtic beginnings.

Set at the cusp of Rome’s fall, Brawen’s Journey: Fire and Ash follows one of Fiery Arrow’s favorite characters as she rebuilds after all she’s known has been destroyed.

Thanks again to everyone who has read Once A Goddess, Fiery Arrow and now, Brawen’s Journey. I’m looking forward to writing a few more Brawen stories!

Thank You for a Great Book Signing!

Thanks to everyone who visited Little Washington Winery on Saturday. We had a great time talking about wine, books, and writing! I’m looking forward to a few more signings around town for the holidays – watch here for updates!

I crept around the corner and leaned against the rough thatch wall. Damp mists disguised any shadow I might have cast as I hid in the crevice created by the opened oak door and outer wall of our house. Maithghean, the chief druid, and my father, Dubhtach, spoke in hushed tones. Their conversation was about me. I willed the sounds of the bawling cows and snuffling pigs from our farm into the background.

“Dubhtach, Brigid knows who she is and she’s keeping it from us. We must find out why.”

“And therefore you are biased, blinded by your relationship. I can see clearly, I tell you!” Maithghean pounded his fist on the table for emphasis, using the full force of his superior status against my father’s words. “I knew of her powers before she was born. I knew. . . ”

Father cut him off. “You know nothing! You sheltered her mother temporarily but you hold no prophecy over my daughter!”

Fear rose within me. I had glimmers, faulty strains of memory, which gave me a vague awareness of before. My past was like a scattered puzzle. How could Maithghean know what I had been, when I struggled to grasp one tangible piece?

“We must test her, Dubhtach.” His voice dropped to a low whisper, ignoring my father’s reference to their long history together. “If she deceived us about her powers and knowledge of her former life, we must bring her to the sacred circle.”

“The circle? There is no need for such extremes.” Father paced. His footsteps fell heavy on the earthen floor.

“She can be tested in the oak grove!” Maithghean’s voice rose as if my father had not spoken. “Her trickery must be exposed. All the druids need to know what she hides.”

“This is ridiculous!” It pleased me that my father came to my defense. “It wouldn’t work. I taught Brigid myself. She is druid-trained and would pass any test you gave.”

“Any test?” Maithghean hissed. “She couldn’t fool us under the Test of the Ancients.”

A shiver went down my spine. Scared children whispered superstitions about the Test of the Ancients. Parents threatened them with dreams of the Ancient ghosts, forever watching. The druids secretly conjured the spirits of the Ancients, the original inhabitants of Éire. I had never seen the rite performed.

My father, also a druid, stood firm. “Absolutely not. To put a young woman through that ritual is certain death.”

Maithghean shrugged. I heard the casual drop of his robes, as if he didn’t care whether I lived or died. “It’s only ‘certain death’ if she is not one of them. The Ancients protect their own.”

What if only dreams haunted my sleep? Dreams and nothing more? Yet even I knew my dreams were unexplainable, and the visions I had of the Old Ones, unmentionable. Would the Ancients protect me?

I remained crouched with my hands and knees in the mud. I waited for my father to answer Maithghean’s claim. By not coming to my defense, I believed he chose the chief druid’s side. The two men left the house.

I stayed behind the door until I was certain they wouldn’t return. I was shocked that my father would allow me to undergo the sacred – and dangerous – test. My palms, damp and brown with the mud that stuck to them, betrayed my fear. I wiped them on my skirt, and hoped the tell tale signs would blend in with the green and brown woven plaid.

“It would behoove you to be more careful, daughter.”

I jumped as my mother spoke. She had witnessed my eavesdropping as she walked from the cowshed. Her gray cloak, evidence of her slave status, blended in with the sky behind her but her brown eyes burned through me.

“Mother. . . ” I hoped she wouldn’t tell Father about my transgression. She cut off my words, angrily meeting me in three quick strides.

“Don’t allow them to catch you! Do you realize what punishments the magician could provide?” Her intensity caught me off guard. The magician. Maithghean. Rarely was my mother harsh with me. Then she pointed west. Father and Maithghean walked along the path, the side of our house clearly visible. They could have seen me.

“I won’t get caught. Please don’t tell Father that I was listening.”

She pulled me by the arm and led me to the darkened stable. “What did you hear?”

I hesitated, unsure if I should tell her about the Test of the Ancients. Yet already my life was at risk and Mother had studied druid lore in her own country.

“They want me for the sacred test, Mother. The Test of the Ancients. Maithghean believes he can. . . ” I stopped. “He believes he can find out things…about me,” I finished lamely.

“You’re different, Brigid. You always have been, from the moment of your conception. Maithghean knew of your uniqueness before you were born. He sensed it as you grew in my womb. He would have gladly sold me off, but he allowed Dubhtach to keep me, despite the problems with Sena.”

“Why? How? How can Maithghean know there is something unique about me…something I don’t even know?”

“Think about it Brigid. You have always shown signs of having special powers.”

“What kind of powers?” I asked, although I already knew the answer. They were the forces I kept hidden, the voices that told me to do so. Not yet, they begged. You can’t release your knowledge to the world yet. They’re not ready. They won’t understand. I didn’t understand.

“Different things.” She paused. “As a child, you could draw light to you. Passers-by claimed they knew when I left you alone. They saw a fiery glow through our doorway.”

I thought of the heat that gathered around my brow when my anger grew.

“Peasant talk, really. But there is some truth to it. Do you remember?”

“No.” I pulled the hood of my cloak closer. “That doesn’t answer Maithghean’s suspicions of me. And why disturb the Ancients?”

“Because others are jealous,” Mother’s gaze caused another shiver to engulf me. “What you were born with, others have sought their whole lives to attain, with blood and sweat and hard work. You come by these gifts naturally. They will hate you for it.”

A cold hand snaked around my throat. I gasped, unable to speak. My heart pounded. I kicked and thrashed but the hand held me flat. If I lay still, I could breathe. In the dark, shapes and shadows were visible but nothing else.

A sticky, sweet substance was forced into my mouth, causing me to gag. I coughed and choked, but the tingling began immediately. The shadows pulled my nightclothes over my head. I tried to raise my arm to fight, but my limbs were heavy, weighted.

They carried me outside, naked, lifted high above their heads, a dozen hands supporting me. The dark sky wavered like the sea. The moon remained dark, hidden in the final phases of her cycle. Waves of nausea passed over me, and I swallowed hard against the stickiness at the back of my mouth. I wanted to cry out but I couldn’t make a sound.

The shadows placed me on a wooden surface, a motion that caused the world to spin. Tiny bonfires blurred together in a single circle of light which surrounded me. I couldn’t stop the vertigo, nor could I grasp the wood beneath me. The sickening feeling overwhelmed me.

I was exposed in the circle’s center. Tremors convulsed through my body, and I flailed uncontrollably. The weight pressed against me until I could deny it no longer.

Flashes of memory revealed themselves to me. I saw the man who appeared in my dreams. Who was he? Where was he? The pictures flew by again in my mind’s eye.

A low voice snarled in my ear. “For whom do you cry out?”

Danger. I searched for some way to ground, to connect with the earth so I wouldn’t be lost in this otherworldly realm.

I saw a flash of the man’s face again. Patrick. It was he…Patrick, the Christian, who haunted my nighttime visions. An incomprehensible series of jumbled images filled my mind, unfamiliar names, and foreign places. Patrick, Padraic, Adraic…

“Who? Who will help you?” Warm breath rested on my throat. The voice couldn’t be trusted.

My mind split in confusion, pulled between the present and the past. I viewed the images from a distance and tried to make sense of the random pieces, looking for the thread that tied them together. Patrick was the common theme that appeared before me. I could observe him from my induced state…no, more than that. I knew him. I heard him, his thoughts. And then, I saw my life unfold beside his, my childhood up to this point…and within this, I saw myself with him in a time before… him but not him…Patrick, Padraic, Adraic. I watched the scenes play out until another rude awakening from the distrusted voice jolted me back.

A voice deep within me spoke. My own voice – yet not my own. Don’t tell Maithghean. Protect Patrick. Protect yourself.

Find Fiery Arrow on Amazon  or Barnes and Noble.

Things I Write About