Terrible Teachers, Writing, and the Tao

I was tired, the cause easily blamed on the finale of The Night Of. It wasn’t that I didn’t want to go to work, necessarily (I mean, who does?) – but I wasn’t ready to talk to dozens of people before lunch. As  teachers, that’s what we do…our classes, kids in the hallway, and sometimes – if you get a free minute – a co-worker. Rarely do I hold a conversation with somebody over the age of 18 between the hours of 8 – 3:30.

And I knew what waited for me. The shiny new year newness wore off last week as the first set of essays were turned in. I’d done my first read through and had taken pen to paper, noting edits, revisions, and writing why didn’t you change this when I told you to when we conferenced? That’s not the part I hate, though. That part is the third step, alongside the rubric, and throwing a grade on the final essay.

As I procrastinated, this article popped up on the NCTE blog: Writing Instruction In Our Schools is Terrible.  Normally, I like Jay Mathews. Not today. I read this article, and -mistakenly –  the comments (never read the comments!) Those lousy teachers, according to many of the comments.  Let’s not analyze the past twenty years of standardized testing. Let’s not look at a data-driven institution based on the ever independent variable of children. And let’s not look at the randomly small and limited sample size. Let’s not explain how these findings were evaluated. As I looked at the pile of typed essays, ones that had been drafted, revised, read, advice given though little taken, I wondered what more am I supposed to do? Three block classes plus a weekend dedicated to a 500 word narrative essay?  I believe I directed the F-word to Mr. Mathews more than once. Ok, in his defense, he did point out the flaws in the Common Core, which my state does not use, so I suppose my verbiage was directed to the commenters.

Grumpy upon grumpy…this has always been the part about teaching that got to me the most: the general public opinion of how awful we are. Except the week before school starts,then it’s the opposite end of the saccharined spectrum – Let’s thank our teachers with 10% off at the office supply store. Oh yay!!!!

Anyway. I digress. The point is this. Near the end of my Monday, as I was planning out the week, this is what appeared in my World Lit teacher text: 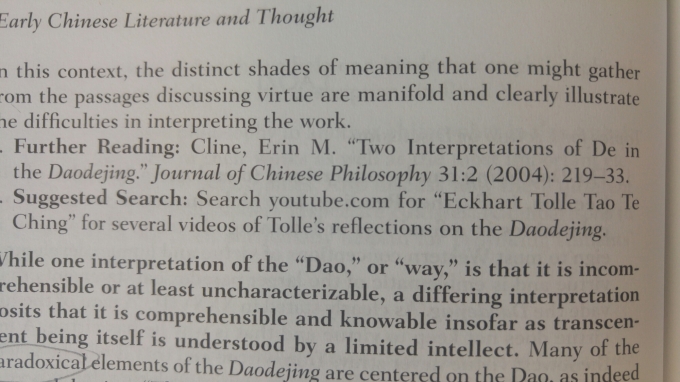 Eckhart found me. On the midst of my miserable Monday, there was my daily dose of the Now.

Things I Write About